Eventscape was contracted to provide 4 custom interior features for this corporate office. In the lobby a curved millwork feature wall created a double “S” shape in plan, with an overall length of 125-feet long by 12-feet high. Finished with a series of custom extruded anodized aluminum fins, and centered on the central theatre door opening, it resembles the movement of a curtain opening onto a projection screen. This custom fin design also continued on the theatre walls and both areas included flexible LED strip lights. Millwork and backlit solid surface was used for the reception desk and three lobby columns that Eventscape also produced and installed.

Lobby Walls: Centered on the opening for the theatre doors, the fin walls resemble folds of a curtain, with two openings, one for a servery and the other for a large LED TV screen. Over the doors, the fins were just 23-inches long and resembled a proscenium header curtain. Secured at the top and bottom with steel knife brackets, the fins articulated out up to 18-inches, varying along the lengths of the curved walls. During the mockup stage, the Eventscape team determined the maximum and minimum width of the articulated curves that could be built using the high pressure laminate. Gensler also approved the anodized finish and determined the spacing and attachment of the aluminum fins.

From Gensler: “The architectural shape of the wall was inspired by the fluidity and movement of an old movie reel. What was important on this project was to honor the glamour of old Hollywood, but showcase the forefront of digital innovation and technology. The millwork wall was designed to become an “architectural drapery”, each fin undulates at a slightly different degree to resemble the movement of theater curtains. Building anticipation, the swoops beyond the fins were meant to lift and reveal the integrated technology – a large-scale digital screen that shows movie previews throughout the day. The grand entrance is a modern day marquee, and invites guests in to the main event – the theater. The reception desk was designed to not stand out, but yet be a part of the architectural drapery wall – an approachable curved piece that is the guest’s first tactile experience to MPA.”

A total of 300 12-foot fins and 300 23-inch fins built from custom anodized aluminum fins were installed on the curved wall. Finished with a skin of white matte HPL, on the top wall portion and black matte HPL on the bottom, a swooping line of light divided the two. Eventscape wood shop fabricators milled a smooth arc that transverses each section for an exact press-fit installation of the flexible LED tube. Eventscape built two laser-cut metal MPA logos for the lobby walls. One was anodized champagne aluminum and the other finished with a black powder coat.

Theatre Walls: Inside the theatre, Gensler designed a repeating vertical fin feature mirrored on both walls. Built of 2” x 3/4” solid Sapele wood strips, and varying in length, eight feet was the longest piece possible to avoid any warping. Seams were placed strategically at speaker openings for continuity. The fins were secured with knife brackets on the black felt skinned wall.

On the lower section, 3/4” x 1” poplar wood fins were used, painted to match the anodized champagne finish of the lobby extrusions. On the curved wood base, a larger block of wood was used and then CNC milled down to size to create a more stable product. Eventscape milled a channel into the wood for the strip of recessed LED light. The light rail continued along the bottom of the proscenium and onto the opposite wall.

The theater fins were designed to create an emphasis on entertainment, each individual fin was a unique length, integrated with light to create a fluid view towards the AV screen. The intimate branded experience is further enhanced with the use of wood veneer as a warm architectural feature that also helps with acoustics.

Reception Desk:The millwork desk was a semi-circle design that followed the arc of the lobby wall. Built of millwork with a black laminate finish, the front face transaction counter was built of curved, backlit white solid surface. The Eventscape team used the longest possible product available (12-feet) to create a seamless box. Extruded fins with the same anodized champagne finish finished the front of the desk.

Lobby Columns: Eventscape provided column wraps for three of the structural concrete columns with side aluminum panels and front face of backlit solid surface. Each of the three columns matched up to three ceiling light features that pointed back and met at the center of the theatre entrance doors. 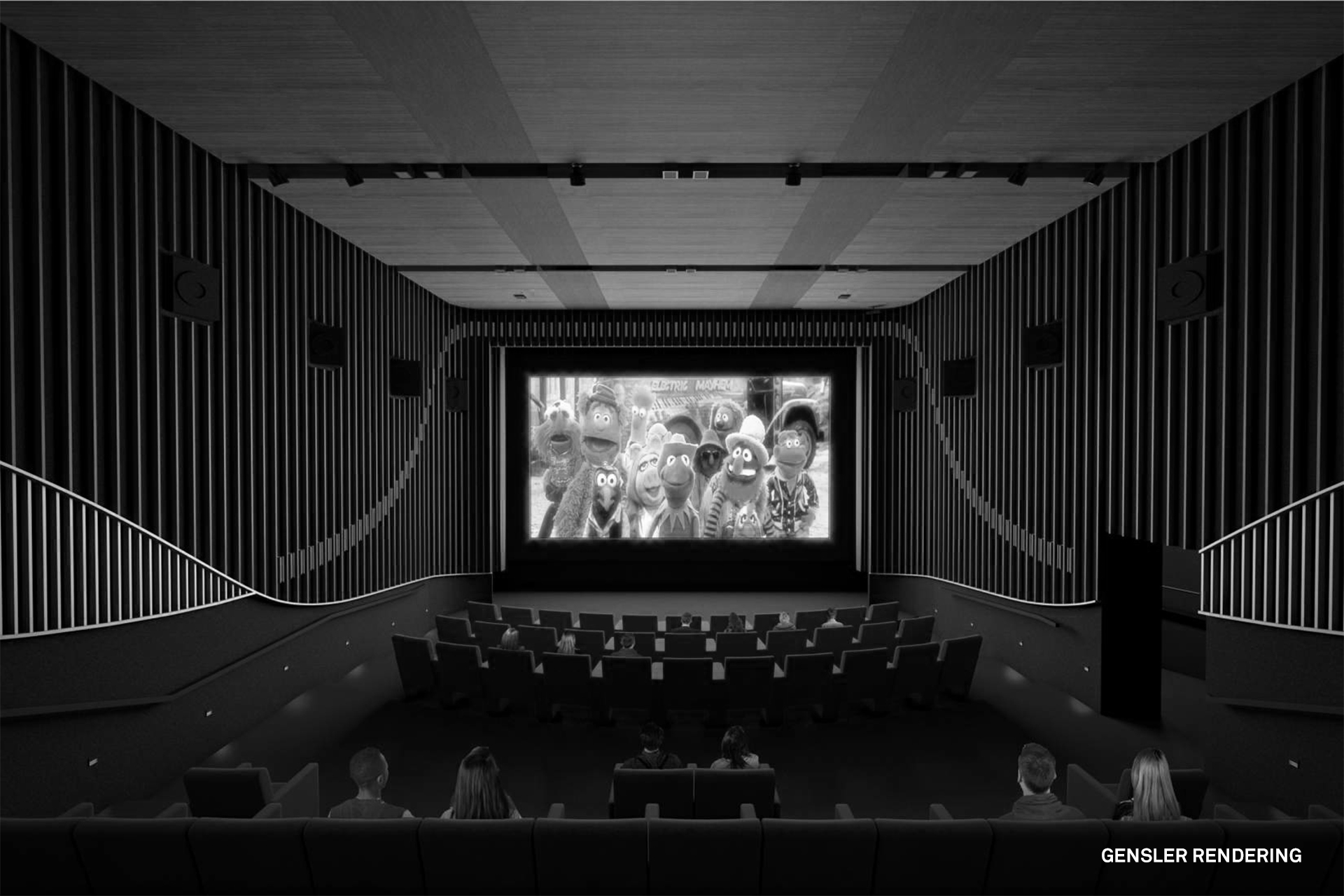 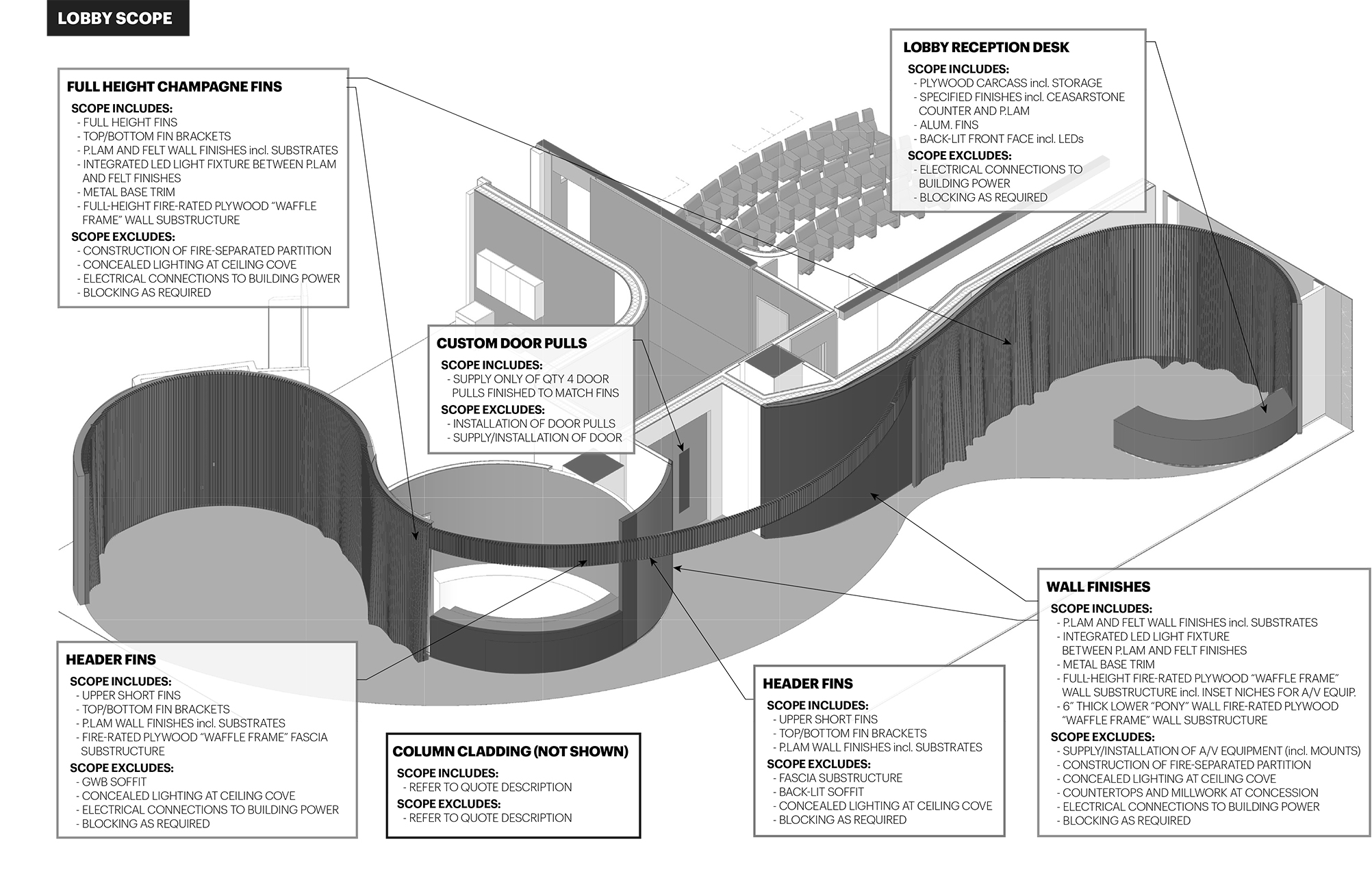 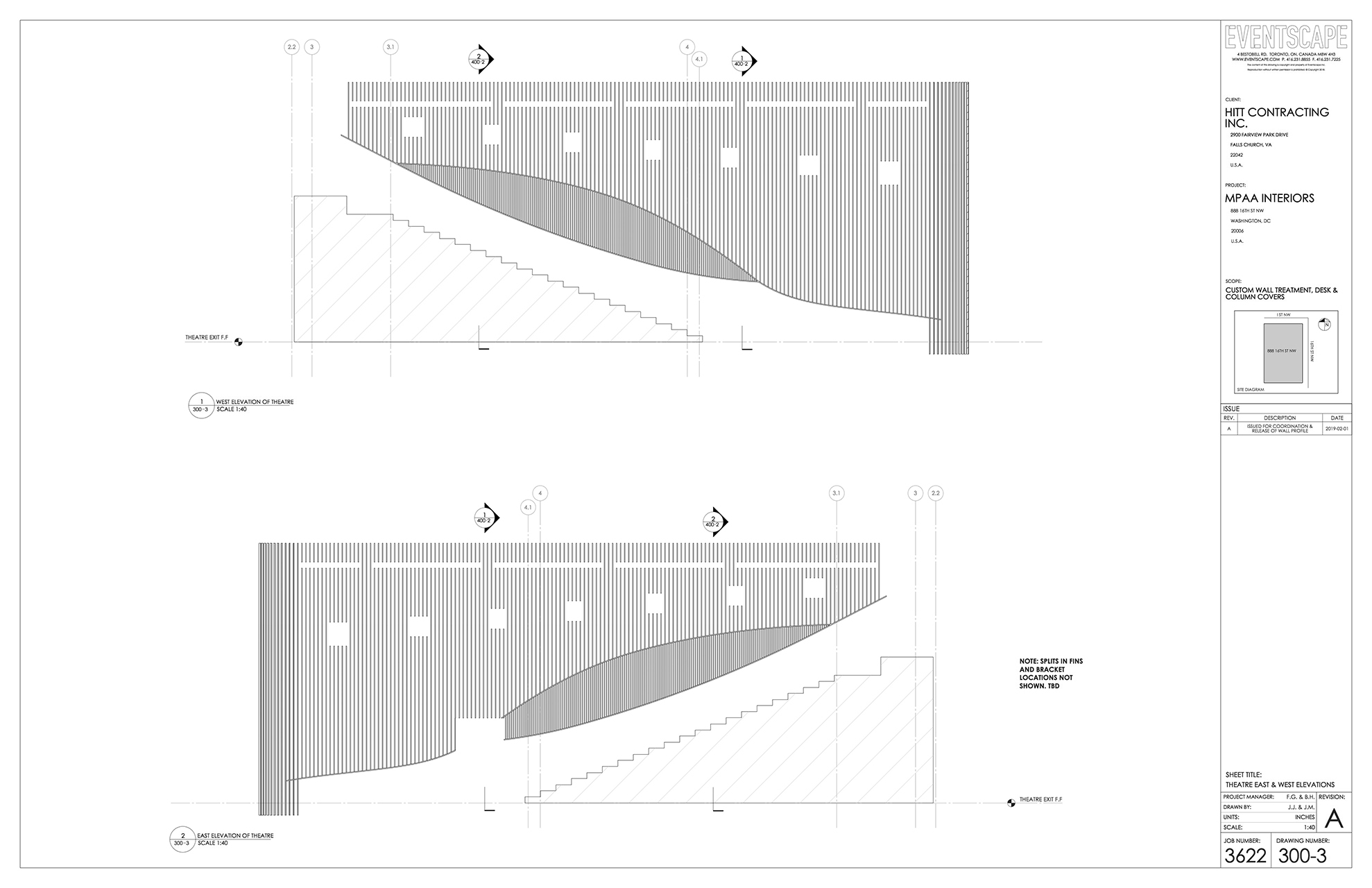 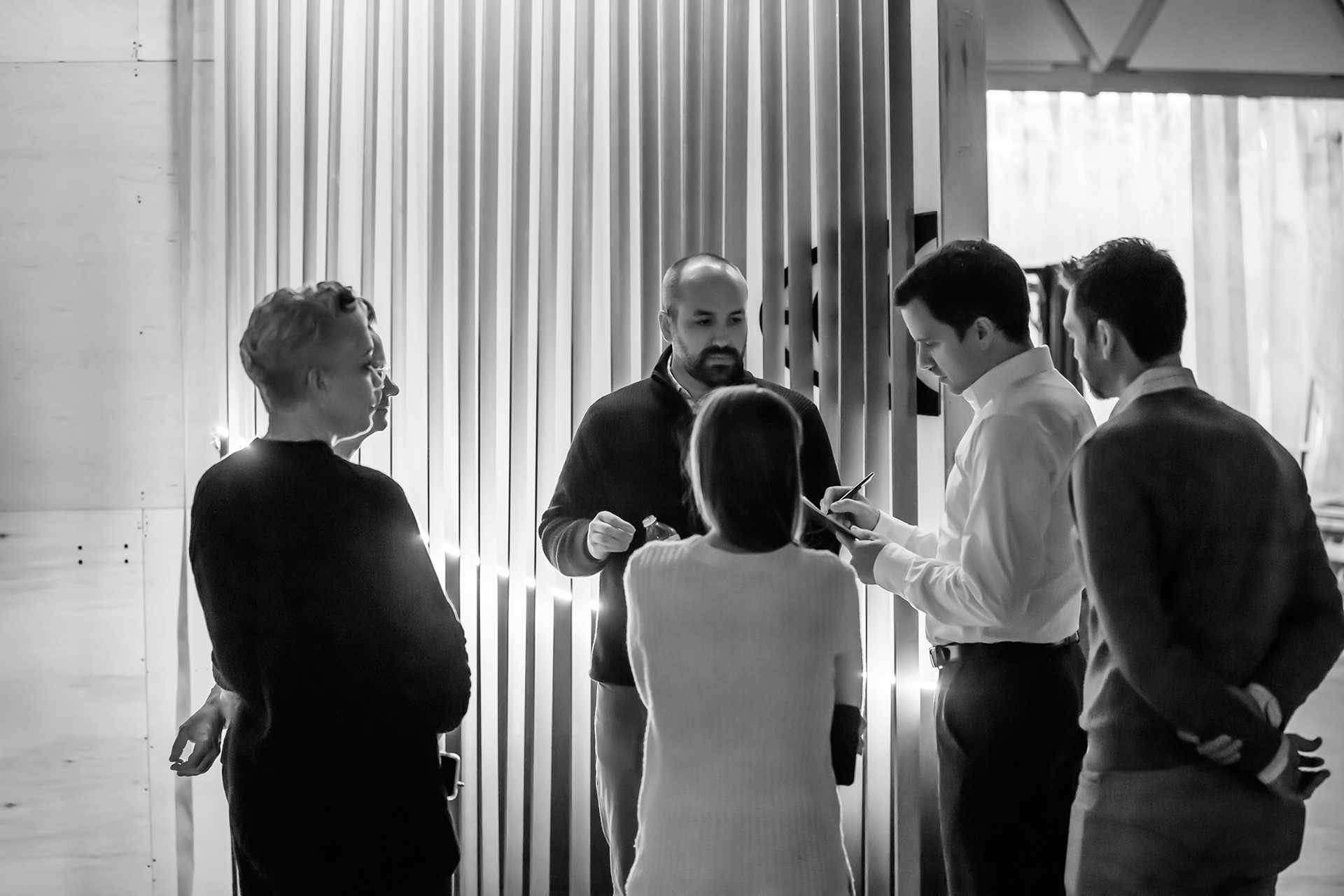 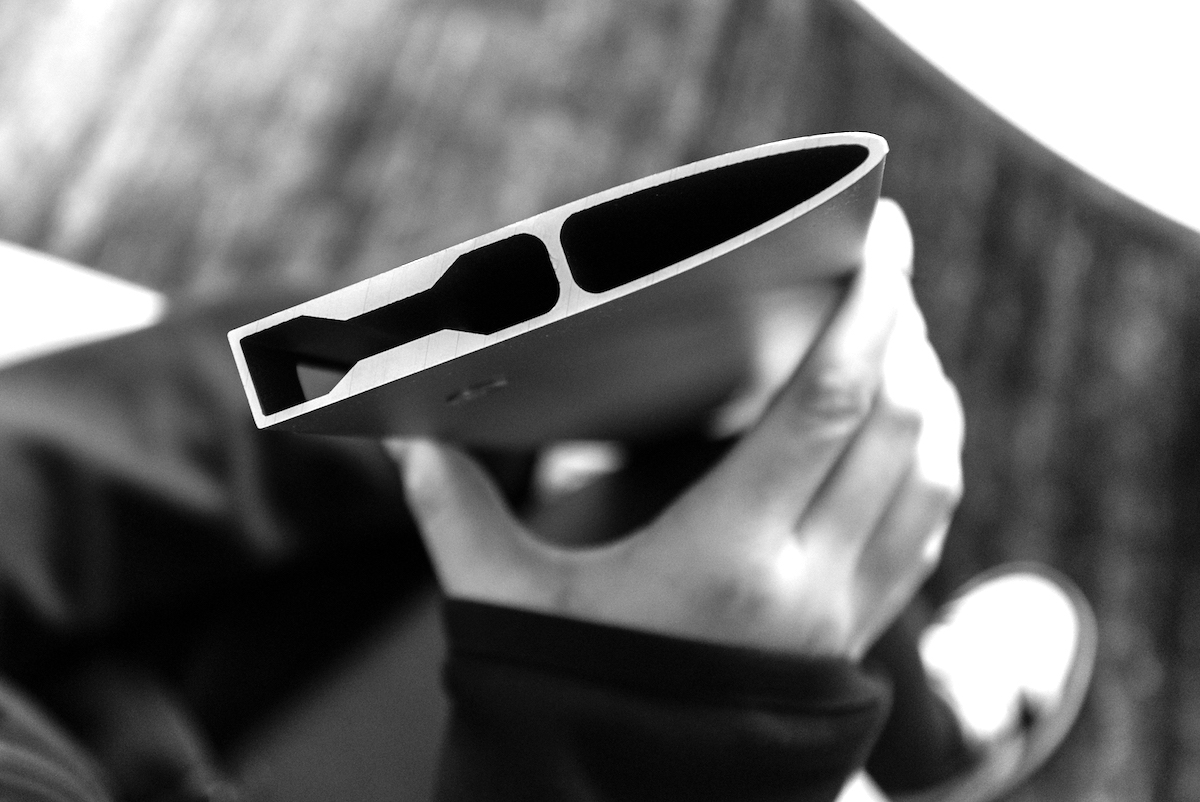 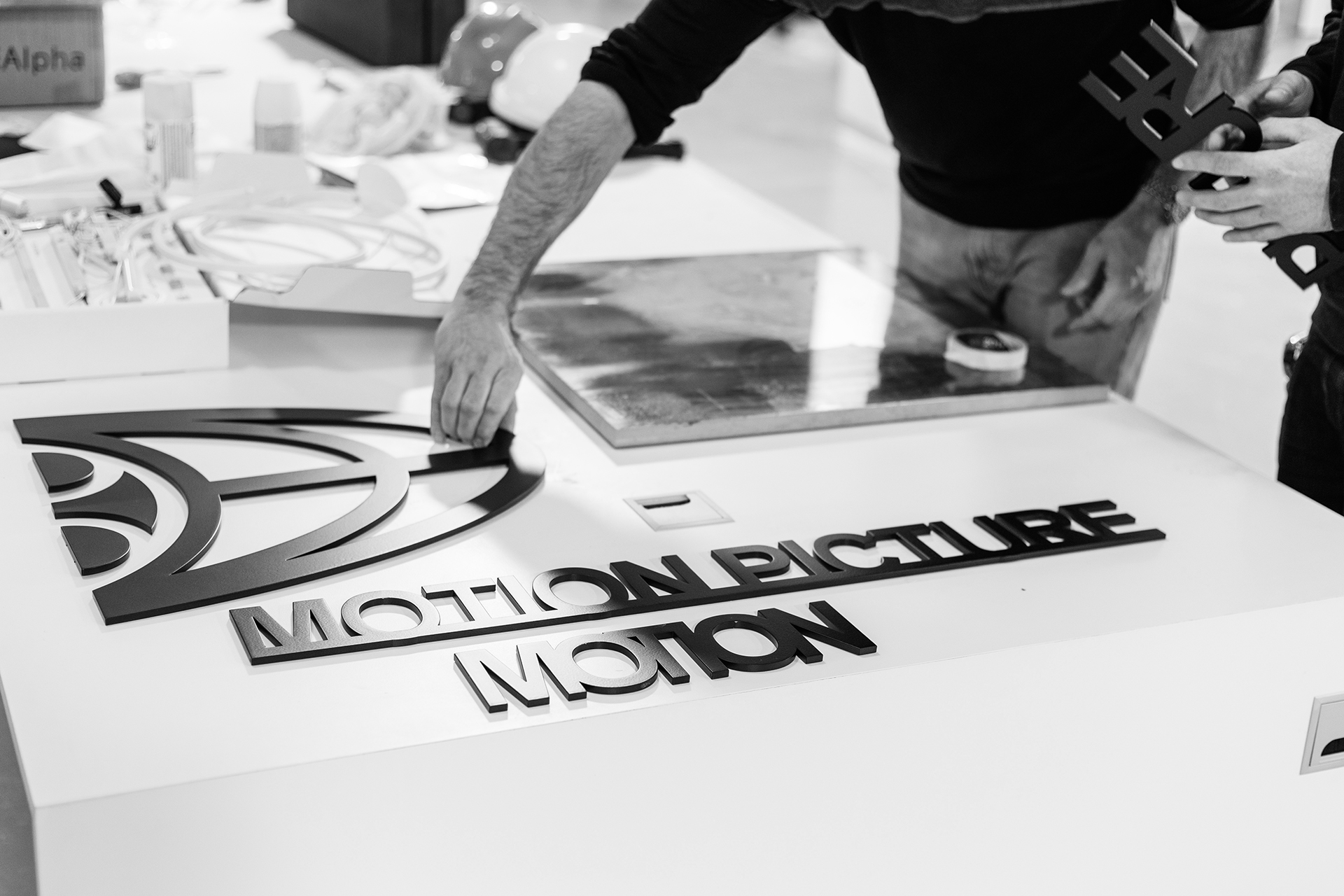 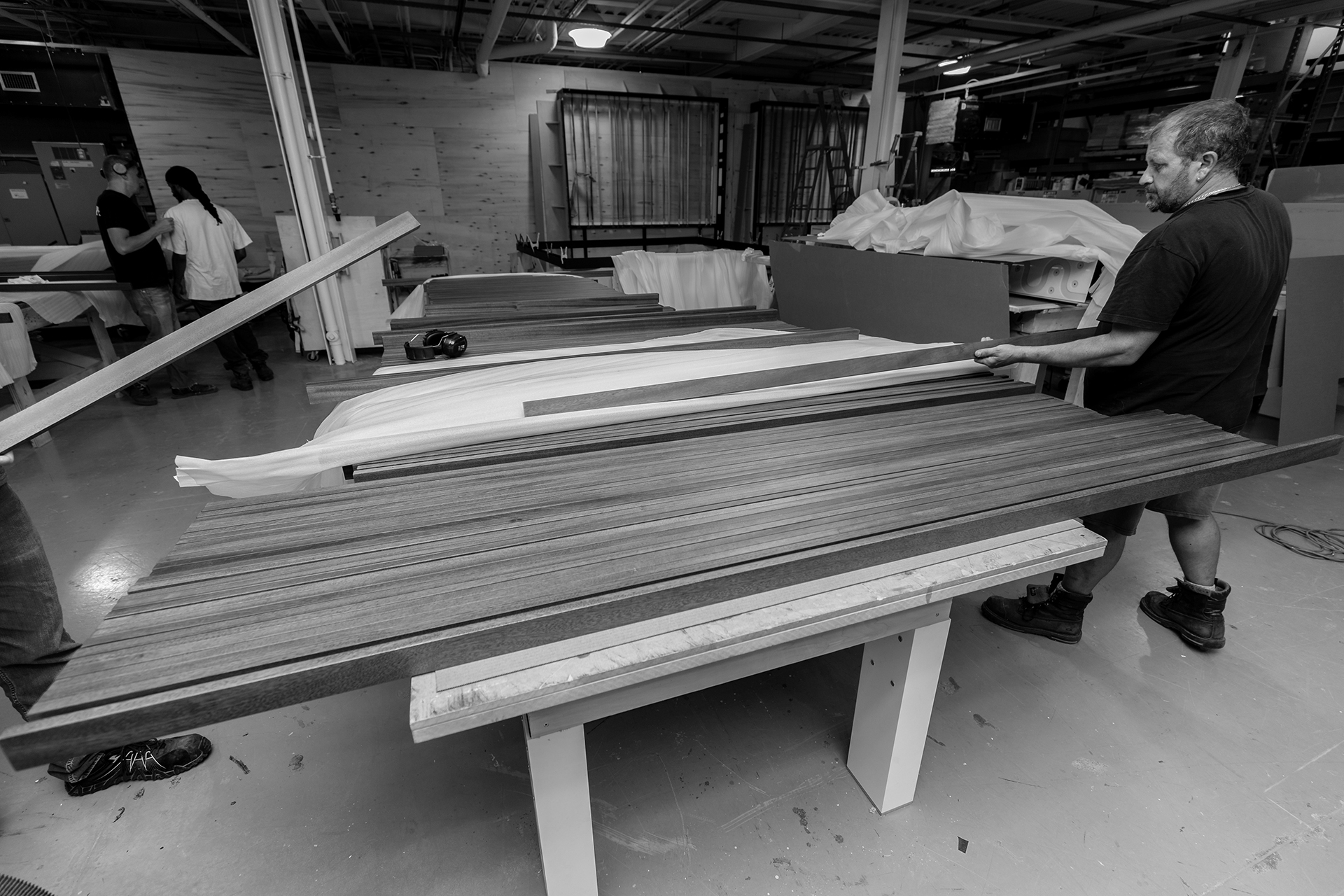 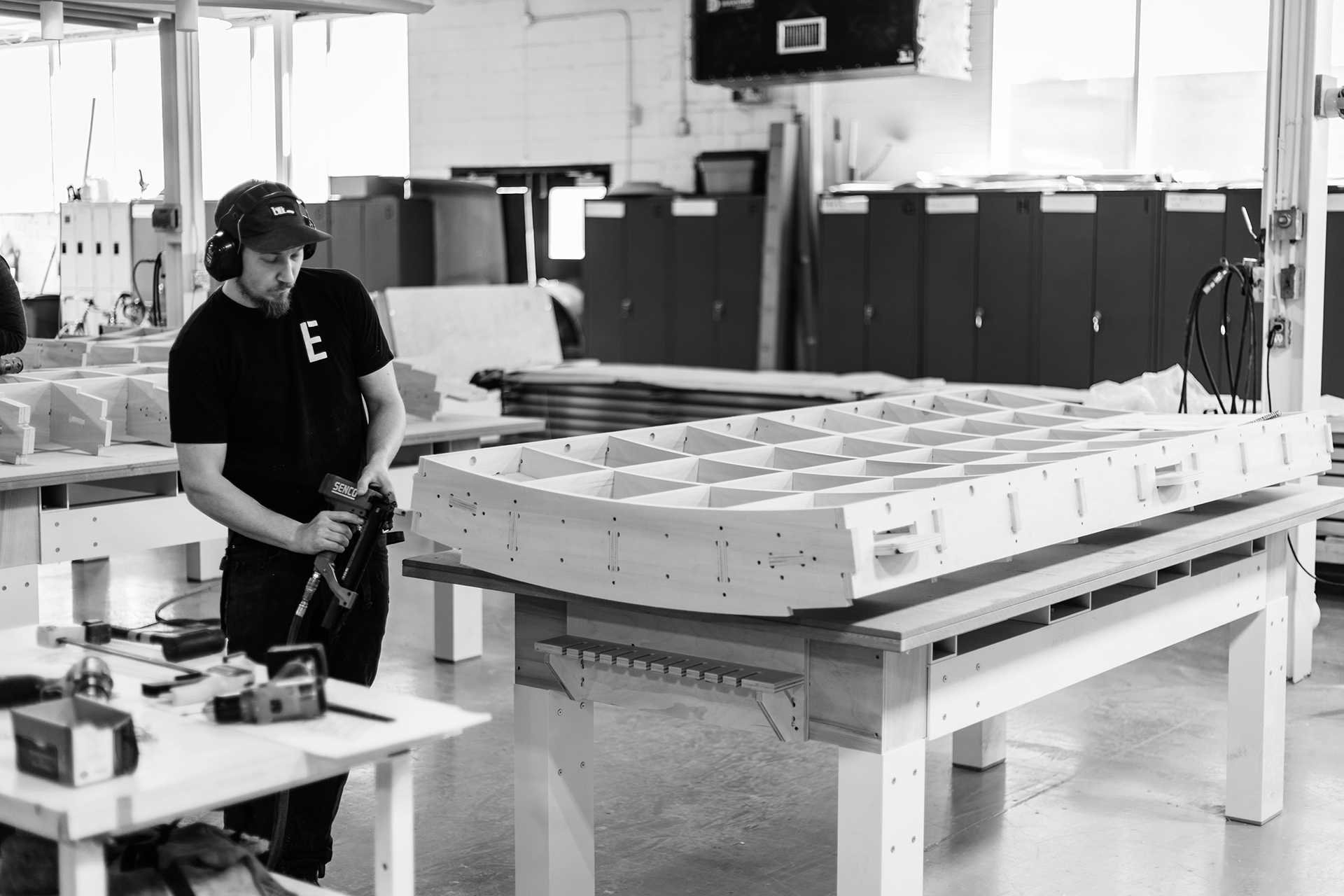 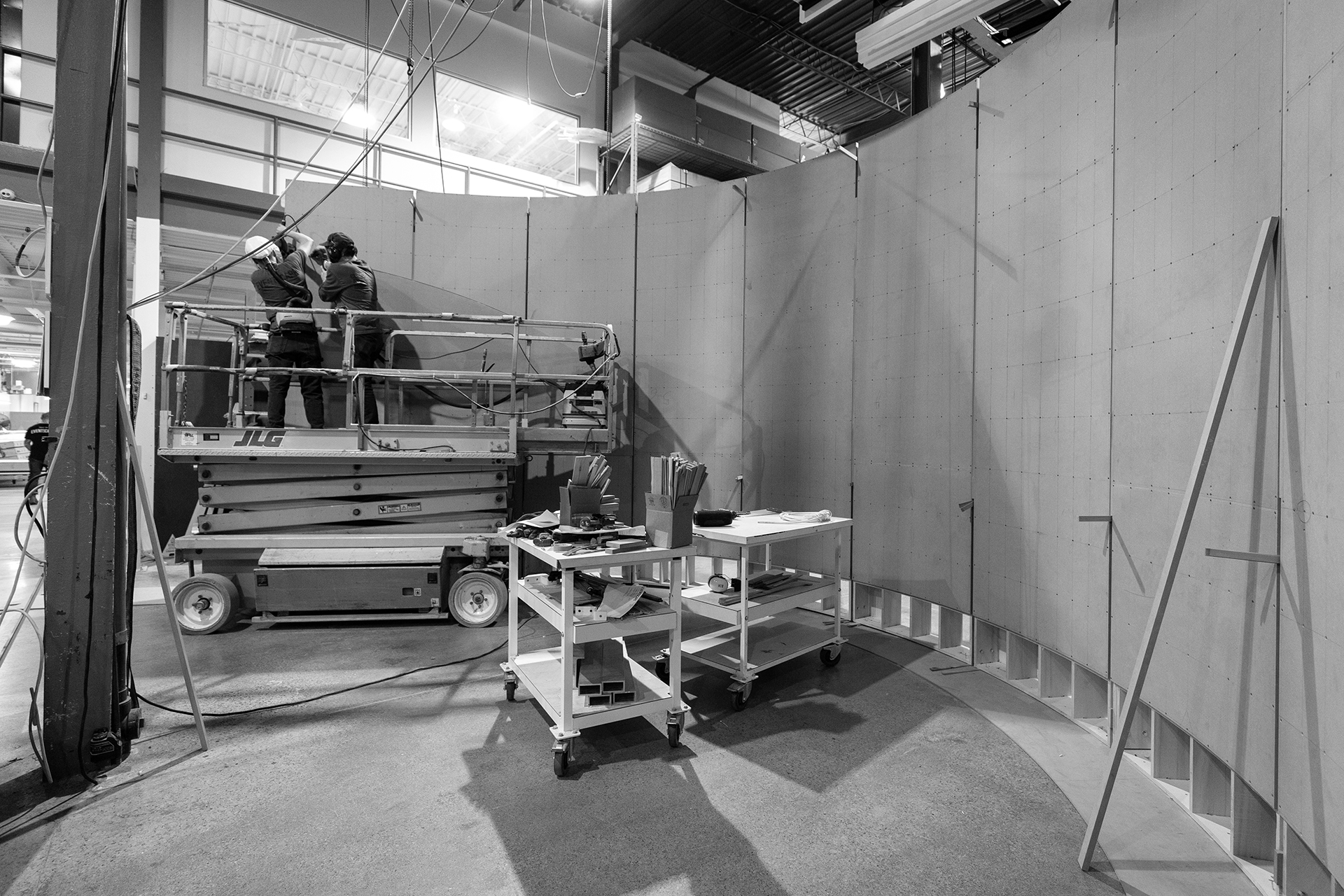 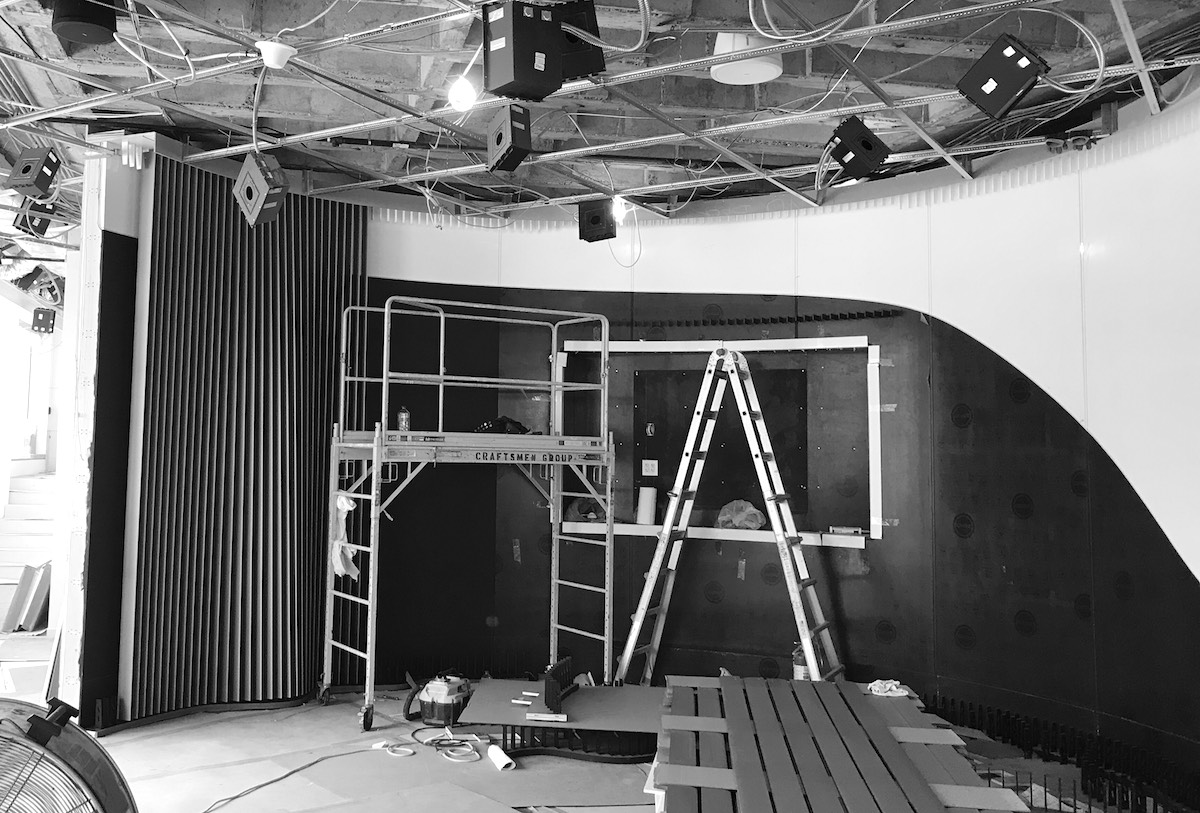 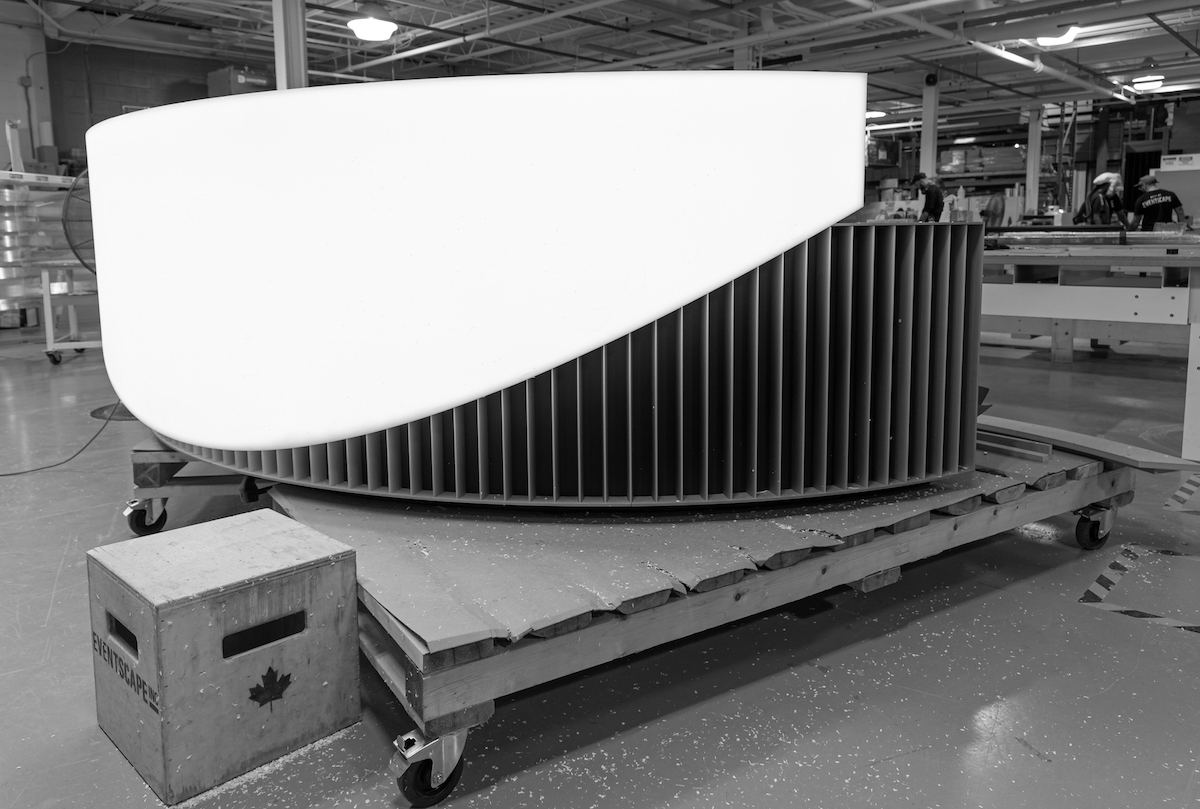 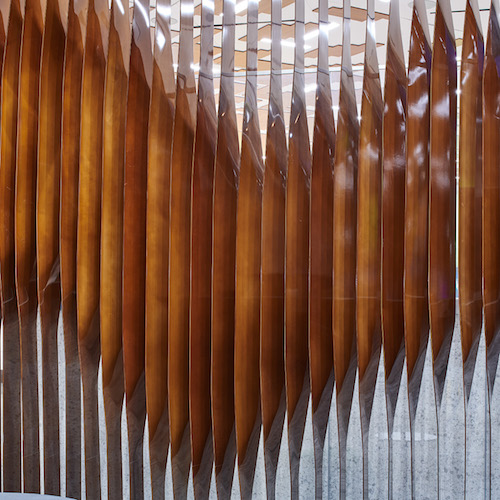 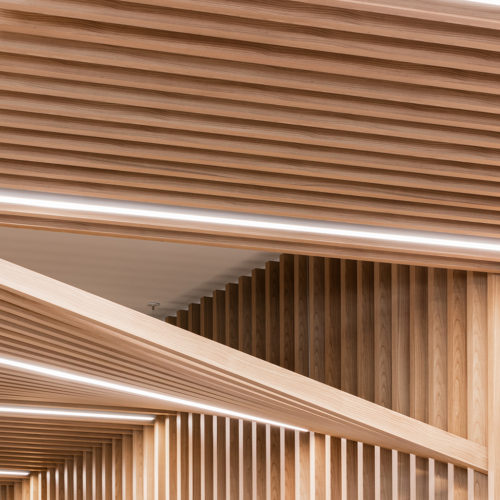